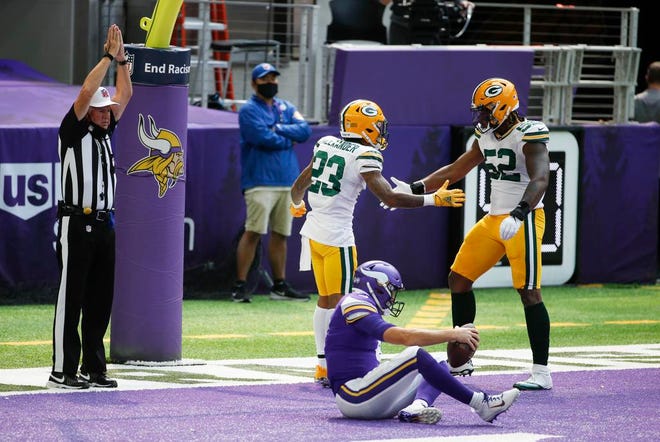 The Packers took care of the Vikings 43-34 in week 1, spoiling the Vikes "Home Opener." Here is our 4 takeaways from the game...

1. Preseason games ARE necessary! On the 1st drive of the game you could see how rusty the Vikings Defense was. Guys not getting off blocks and multiple missed tackles (like Eric Wilson completely whiffing on the Jamal Williams screen pass) were just the start to what would be a disastrous day for the D. On offense, besides the typical scripted first drive, we were full of 3 and outs the rest of the first half. I knew the first month was going to be interesting with no preseason games but game 1 sure was rough for the Vikings!

2. Vikings Defensive Line Not A Factor. Everson Griffen and Linval Joseph are gone. Linval's replacement Michael Pierce, opts out of the season. No problem, we still have Danielle Hunter! Oh crap... he's on IR now for (at least) the first 3 weeks. I can not remember the last time I watched a Vikings vs Packers game and we didn't put Rodgers or Favre down for a sack at least once! I was hopeful the newly acquired Yannick Ngakoue would be able to put some pressure on Rodgers but he was contained all game long. Green Bay also seemed too have little trouble rushing the ball up the middle against our experienced Defensive Tackles. So while we wait for the day Hunter can get back out on the field we will just have to be hopeful that guys we have up front right the ship.

3. Rodgers Picks Apart Young Corners. Mike Hughes (23), Holton Hill (23) and rookie Cam Danztler (22) were given a rude welcome back to football from Aaron Rodger on Sunday. Rodgers completed 32 passes on 44 attempts for 364 yards and 4 TDs. Rodgers found multiple wide open receivers throughout the game as it appeared there was some confusion at times with the young corners. Then there were the times where the coverage was pretty good and Rodgers still placed the ball perfectly into the receivers hands. Vikings rookie CB Cam Dantzler had pretty good coverage on Marquez Valdes-Scantling but Rodgers still found the receiver for a 45 yard TD before the half.

4. The Vikings Offense has Potential. The Vikes scored a touchdown on their 1st drive of the season. Then for the next 2 quarters they couldn't get anything going, scoring only 3 points before halftime and nothing in the 3rd.  We did get to see Captain Kirk have a couple nice runs but that might be the only thing i can mention that was positive for the offense between quarter 2 and 3. Then down 19 points entering the 4th quarter the Vikings offense showed up in what some would call "Garbage Time." The reality is the Vikings still put up 24 points in the 4th quarter against the Packers starting defense. Prevent defense? Sure! But if you think star DBs like Jaire Alexander, Adrian Amos, Darnell Savage and Kevin King were just allowing Cousins to throw all over them then you are very wrong! Now only if, A. the Vikings offense could have come alive a little sooner than the 4th quarter or B. The Vikings defense could have come up with a damn 3 and out one time, then maybe we are talking about something different today!

The Vikings travel to Indianapolis to take on the 0-1 Colts. A very Winnable game if the defense can play better. If Gardner Minshew can put 3 TDs up against the Colts, than Cousins should be able to as well!

The Packers will host the 0-1 Detroit Lions who allowed Mitch Trubisky to throw 3 TDs in the 4th quarter and choke one away. Rodgers should have at least 3 TDs by half.